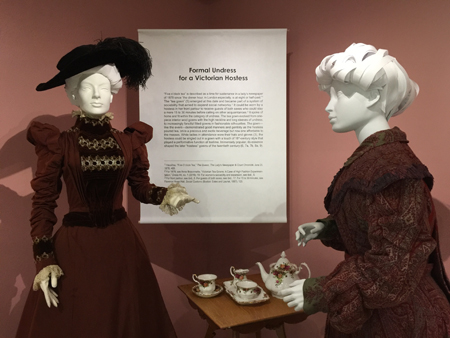 “Five o’clock tea” is described as a time for sustenance in a lady’s newspaper of 1878 since “the dinner hour, in London especially, is at eight or half-past.”[1] The “tea gown” (5) emerged at this date and became part of a system of sociability that aimed to expand social networks.[2] It could be worn by a hostess in her front parlour to receive guests of both sexes who could stay a mere 15 to 30 minutes before calling on other acquaintances.[3] It spoke of home and fit within the category of undress. The tea gown evolved from one-piece interior wool gowns with the high neckline and long sleeves of undress, to increasingly fanciful fitted gowns in fashionable silhouettes. The gown—like the event—demonstrated good manners and gentility as the hostess poured tea, once a precious and exotic beverage but now one affordable to the masses. While ladies in attendance wore their hats and gloves (3), the hostess could be singled out in a gown with a touch of 18th-century style that played a performative function at teatime. Immensely popular, its essence shaped the later “hostess” gowns of the twentieth century (6, 7a, 7b, 8a, 9).