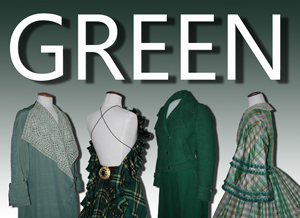 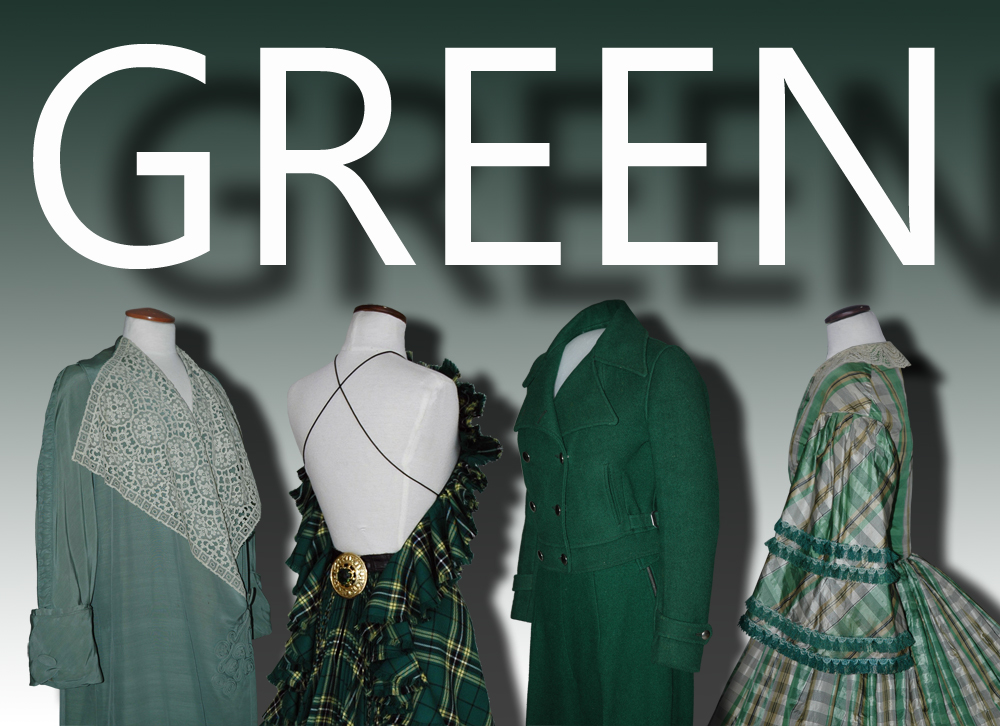 Curated by Dr. Anne Bissonnette with input from the students of the course “Survey of History Dress” (HECOL 268)

The color in the limelight, green is all the rage today as the preferred symbol of the environmental movement. The word green comes from the Old English verb growan, “to grow.” While this hue can signify growth, renewal and health now, green pigments and dyes have had a complicated—and at times toxic—past. Equally as complex is fashion’s potentially harmful impact on our ecosystem. From the obtainment of fibers, their process into cloth and transformation into consumer goods, few of us have either the time or energy to consider how the clothes we wear affect the world we live in.

A dye, a pigment, and now a movement, green is multifaceted. Omnipresent in nature, it was sought as a pigment for painters but seldom prized as a dye since many other natural coloring agents had greater value and meaning. Prior to the synthesis of colors in the laboratory, wearing color meant more than personal preference: if a dye was rare and costly, it affected people’s desire for it. There was no natural green dye in the Western World until the mid nineteenth century. One could however obtain a deep and lasting green hue on cloth by immersing it in both a yellow and a blue dye-bath. This compound process was time-consuming but not difficult as there were many natural sources of such colorants. In 1775, German-Swedish chemist Carl Wilhelm Scheele, while studying the chemical properties of arsenic, developed a green pigment. It was manufactured as “Scheele’s green” and used in paints and wallpapers, as well as a dye for cotton and linen. Like Scheele’s green, “emerald” green (known under many names) was arsenic-based. It was applied generously on cheap paper or walls and could produce toxic dust and a deadly gas. Like many other new shades, these deadly greens created a virtual frenzy. Finally vert de Chine (lo-kao), the first vegetable green dye obtained from a Chinese shrub, arrived in Europe in 1852 or 1857. By 1859, a new green drawn from a mineral source, vert Guimet, could be produced in the laboratory using boric acid and potassium dichromate. It was widely used in textile printing, as well as in the former applications of Scheele’s green. This innovation was a much safer alternative to arsenic greens but, then as now, the impact of such ordinary commodities as dyes on human and environmental health was seldom an issue.

Green has come a long way and has become an example of our changing priorities. As our natural resources diminish, we now value them more. As we re-evaluate our ways, we must look at clothing production, consumption and disposal carefully. Though colors no longer denote status, other signifiers have taken over that pose a serious threat to sustainability. Among them is over-consumption. While fashion has always come in cycles which have nothing to do with a garment’s obsolescence, the spread of this insatiable thirst is ever expanding. To quench these desires, quantity is replacing quality. Though clothing remains a basic human need, can we through good design and responsible consumerism, reverse this tide and create a sustainable world?