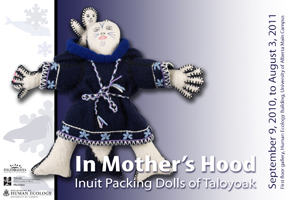 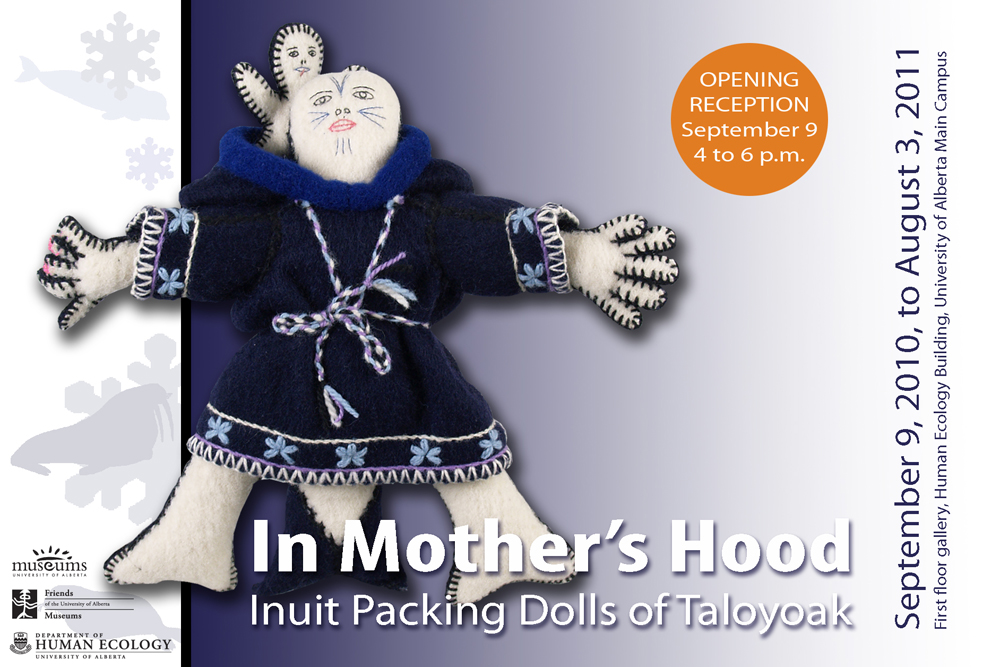 Inuit girls learn at a young age how to sew. This was once vital to the survival of their people and has generated items of exceptional design and craftsmanship. To introduce them to the art of stitchery, girls of around ten were taught to make dolls with removable clothes.1 This didactic process led to the acquisition of a wide array of skills from the skinning of animals to the mastery of the ingenious waterproof stitch. These older dolls made use of every kind of material, including teeth!2 Designed for trade, today’s dolls bridge the old ways with the new wage economy and sensitivities.

Packing dolls are not made or used by Inuit girls but they carry with them the tradition of a rich and complex culture that is over 4,000 years old.3 Like printmaking, which began in the Arctic in 1957, this novel form of expression represents a meeting ground between north and south.4 Peeteekootee Ugyak (Charlie) designed the first packing dolls in 1974 in Taloyoak, a small hamlet of less than a thousand people in Canada’s Nunavut Territory.5 The economic struggle of northern people led the women of Taloyoak to draw on their cutting and sewing skills. They started two cooperatives: Taloyoak Crafts Ltd. (1974-1986) and Taluq Designs Ltd. (1995-now).6 Although not a part of traditional Netsilik Inuit modes of expression, the textile sculptures they create provide access to the lives and history of a people attuned to their surroundings.7 The most distinctive feature of all these stuffed dolls is the young they carry in their parkas. This mimics the way a child is “packed” in a mother’s amauti— a parka devised with a baby pouch (amaut) that is tailored as part of the garment’s main body but is hidden under a large hood. The garment is roomy enough to move the child in front for nursing or to urinate.8 A finger-woven belt fastens over the coat to secure the child to the wearer’s back. The functional excellence of this unique garment addresses an infant’s lack of control as moss placed in the bottom of the pouch can take the place of a diaper.9 Once custom-fitted by skilled seamstresses so as not to require a belt, the amauti now comes in standard sizes.10 It combines old forms, such as rounded back and front aprons, with materials new to the Arctic, such as heavy woolen fabrics called duffle often used in trade blankets. The amauti continues to embody the strong physical and emotional links between mother and child and has become “an identifier of northern women and people.”11

In their roles as entrepreneurs, women of the Canadian Arctic continue to show creativity in the face of adversity. They find new ways to share the stories told by their elders to insure their future. The animals that enabled their people’s survival and the stories that explained their world come to life in a series of dolls expertly crafted and currently sold in a cooperative setting. The dolls might make young and old coo, yet they are rich with meaning and history.

6 In the interim between 1986 and 1995, packing dolls were still produced. Some were likely made using the Taloyaok Crafts Ltd. patterns and produced and sold by individuals who also made new designs. In 1992, a group of woman that called themselves “Nesilik Argnakvik” began what would become Taluq Designs Ltd. in 1995. They also produced dolls first made by Taloyaok Crafts Ltd. and continue to design new models. Mona Igutsaq, interview by author, phone conversation and e-mail follow-up, July 29-30, 2010.