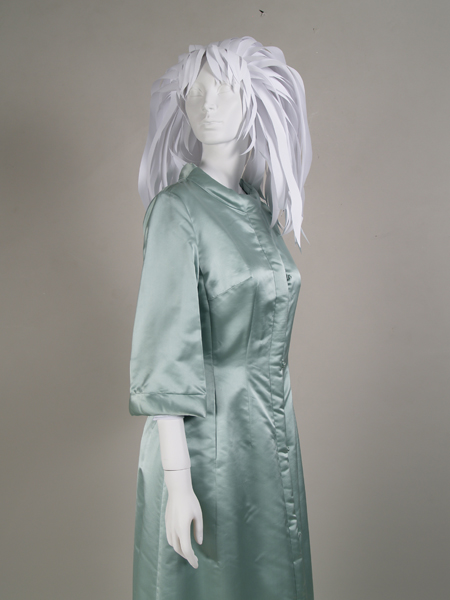 The six to eight o’clock cocktail party became a social event that bridged the day and evening. For this transitional, or liminal, occasion, the cocktail dress was added to women’s wardrobes.  First appearing in 1935, the term “cocktail dress” designated a garment more formal than daytime attire in its use of lavish fabrics, but less formal than eveningwear in its shorter length and greater coverage of arms and chest (8b and 10a).[1] It suited a fluid social environment where men and women consumed alcohol together before dinner.[2] Although this gathering could be held in public establishments, it had strong associations with the home as, during Prohibition (1920-33) in the USA, private cocktail parties were a way to get around the laws prohibiting alcohol consumption.[3] Often worn whilst standing, the cocktail dress could incorporate elaborate draping best appreciated from the back (10b). It remains a specific type of dress that is still found in many women’s wardrobes as full dress events are, for most, uncommon.