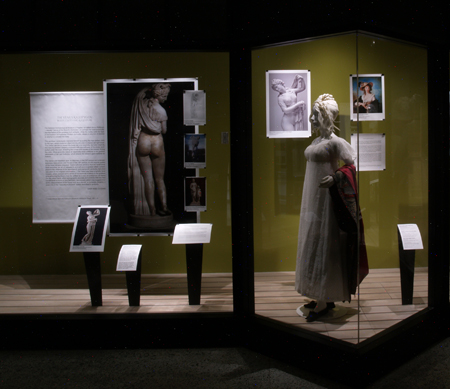 By 1645, the Venus “Callipyge” is referred to as “that so renowned piece of a Venus pulling up her smock, and looking backwards on her buttocks.” 1 Shortly thereafter, the figure becomes a model for ideal bodily proportions,2 with copies in France, England and Sweden.
The statue continued to be admired—or else criticized for its perceived artistic and moral shortcomings—and reproduced in various media throughout the 18th century. Most notably, a statue of Swedish Countess Ulla von Höpken with the body of the Venus Callipyge was commissioned around 1780.
The artistic convention of combining the portrait heads of respectable women with the nude figure of the goddess is Roman in origin, and in no way undermined the modesty expected of such women in real life. Mere mortals cast as the goddess of love and beauty is therefore not a new trend and exemplifies how the search for an ideal is timeless.
Sarah Nash, Co-curator

Bissonnette, Anne, Sarah Nash and Loretta Yau. “A Paragon of Beauty in the Modern Era.” The Re-Birth of Venus: Fashion & the Venus Kallipygos, Exhibitions, Clothing and Textiles Collection, Department of Human Ecology, University of Alberta Museums, May 3, 2013. [INSERT URL].