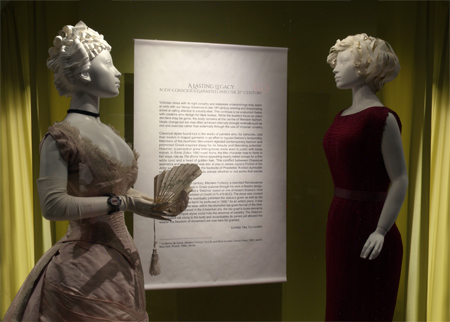 A Lasting Legacy: Body-conscious Garments into the 21st Century

Victorian dress with its rigid corsetry and elaborate underpinnings may seem at odds with our Venus. Advances in late 19th-century tailoring and dressmaking aimed at calling attention to a bodily ideal. This continues to be a recurrent theme with creators who design for ideal bodies. While the bustle’s focus on one’s derrière may be gone, the body remains at the centre of Western fashion. Ideals change but are now often achieved internally through methods such as diet and exercise rather than externally through the use of Victorian corsetry.

Classical styles found root in the works of painters who, for centuries, clad their models in draped garments in an effort to bypass fashion’s temporality. Members of the Aesthetic Movement rejected contemporary fashion and promoted Greek-inspired dress for its beauty and liberating potential. However, a perception grew linking loose dress worn in public with loose morals. In Émile Zola’s 1880 novel Nana, the title character rose to fame in her stage role as The Blond Venus appearing nearly naked except for a thin white tunic and a head of golden hair. This conflict between Classical aesthetics and sexual desire was also at play in James Joyce’s Portrait of the Artist as a Young Man where the backside of Praxiteles’ Knidian Aphrodite causes the novel’s characters to debate whether or not works that excite desire can be considered art.

At the dawn of the 20th century, Mariano Fortuny, a talented Renaissance man, developed an interest in Greek costume through his work in theatre design. He produced a dress called a “Delphos” based on one of Ancient Greece’s most popular statue, the Charioteer of Delphi(475-470 BCE). The dress was created as early as 1906 and he eventually patented the statue’s gown as well as the pleating process for the fabric he perfected in 1909.1 As an artistic piece, it was considered appropriate wear within the revivalist tea gown format of the time. As sexual mores relaxed in the Edwardian era, the tea gown’s loose elements and revivalist Empire styles could hide the absence of corsetry. The Delphos’ light pleated silk clung to the body and accentuates its curves yet allowed the wearer the freedom of movement we now take for granted.
Loretta Yau, Co-curator