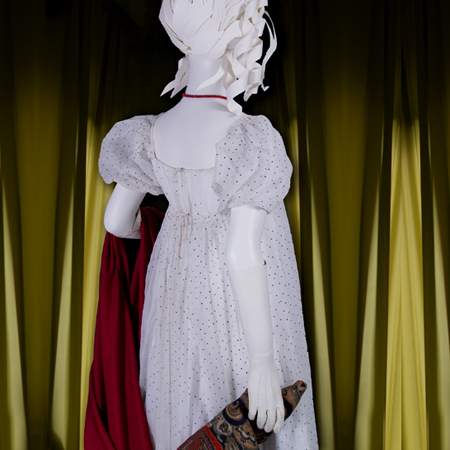 Statues of goddesses abounded and affected color palette and fabric use. When Mercier mentions a wide array of women in muslin gowns, he specifies how these are worn to resemble the Venus “with beautiful buttocks.” To do so, they draped their train on the right arm which helped to delineate their backside and legs. This gesture remained popular as it allowed the suggestive draping of the cloth. Body-revealing garments (man’s breeches) led to a reduction of underpinnings such as petticoats, which had been worn for centuries.

The physicality of the body could be visible or suggested. The trendsetter Madame Tallien exposed a breast as our Venus had while others wore skin-colored jersey sleeves. Breasts—traditionally lumped into one mass and raised high by corsetry—now appeared as two separate volumes often thinly veiled and, in extreme cases ca. 1798-99, exposing the nipples.

Fashion plates evoked our Venus’ gesture—often substituting a shawl for her chiton. While not literally exposing the body, extreme neoclassical dress behavior suggested the body’s shape in both back and front. The Venus Kallipygos’ popularity affected fashion, which helped to undermine traditional notions of modesty.