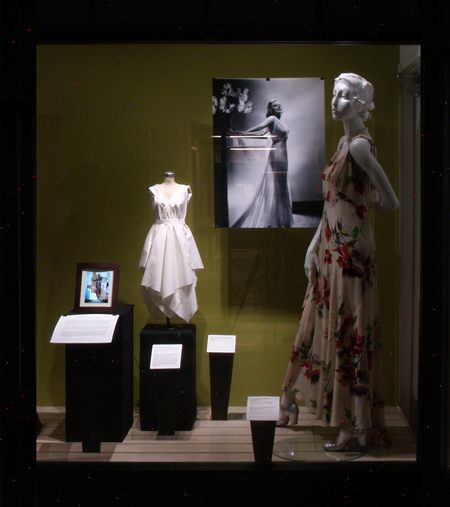 Contemporaneous to Fortuny is American dancer Isadora Duncan who so impressed designer Madeleine Vionnet that her 1907 collection for the House of Doucet was modelled on Duncan’s Greek-inspired dress, bare feet and absence of corsetry.1 The newfound freedom of Duncan’s dress gave her a wide range of motion and the ability to express emotions that was a turning point in the development of Modern Dance. While Vionnet’s collection was a failure, seeds of change were planted that would blossom when she opened her own house of couture.

From 1912-1914 and 1918-1938, Vionnet captured the public’s attention with innovatively cut and constructed garments that put the unhindered body at the center of the design equation. She perfected the bias cut, a technique that allowed the cloth to expand, contract and cling to the body without the use of darts or seams. Vionnet, an admirer of Ancient Greece culture, incorporated elements of Greek dress and art into her thoroughly modern corpus.

Hollywood latched on to Vionnet’s styles to mould leading ladies into sex symbols in the 1930s. Stars such as Jean Harlow, Carole Lombard, and Marlene Dietrich were showcased in clingy bias-cut garments that suggested nakedness without explicitly resorting to this end. Once more, the meaning of this new style of dress traversed between the aesthetic ideal of the natural body and the carnal desire it evoked. This dual meaning is reminiscent of the range of opinions and perceptions the Venus Kallipygos generated through the ages, and highlights the ties that bind our Venus with fashion.
Loretta Yau, Co-curator