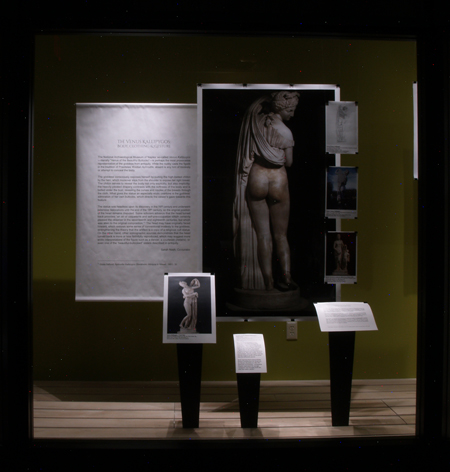 The National Archaeological Museum of Naples’ so-called Venus Kallipygos—literally “Venus of the Beautiful Buttocks”—is perhaps the most provocative representation of the goddess from antiquity. While the nudity casts the figure in the tradition of Praxiteles’ Knidian Aphrodite, absent is any hint of modesty or attempt to conceal the body.

The statue was headless upon its discovery in the 16th century and underwent extensive restorations until the end of the 18th century, so the original position of the head remains disputed. Some scholars advance that the head turned back provides “an air of coqueterie and self-preoccupation which certainly pleased the observer in the seventeenth and eighteenth centuries, but which was alien to the original composition.”1 The head may have originally faced forward, which restores some sense of conventional modesty to the goddess, strengthening the theory that the artifact is a copy of a religious cult statue. On the other hand, other iconographic sources demonstrate that the head turned back is more or less faithfully reproduced, which may suggest more erotic interpretations of the figure such as a dancer, a courtesan (hetaira), or even one of the “beautiful-buttocked” sisters described in antiquity.
Sarah Nash, Co-curator